Dr. Ricia Chansky- winner of an MLA Award and Voice of Witness Fellow 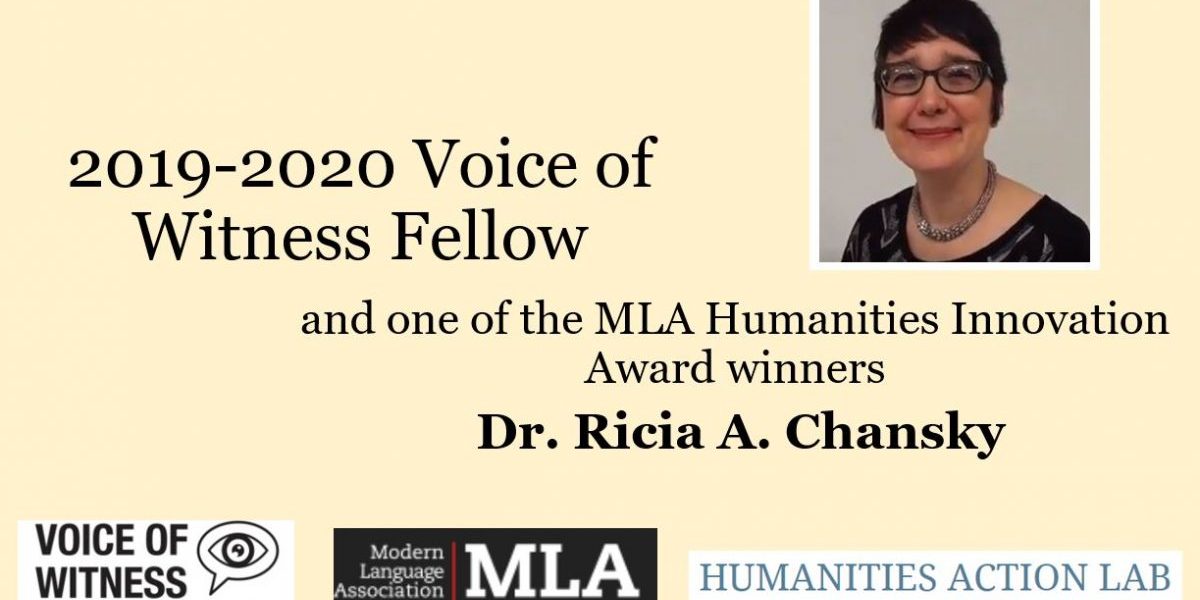 In a recent interview with Dr. Ricia Chansky on November 21, 2018, the Modern Language Association: Humanities Innovation Award winner and 2019-2020 Voice of Witness Fellow shared with us some information about her personal experience developing the project and the importance of raising more awareness on the situation Puerto Rico faced following the tragic atmospheric event: Hurricane María.

The Professor and her students had been working for the past year on a project called Mi María: Puerto Rico After the Hurricane, which is “a large scale public humanities project” as she called it. About a hundred students were involved in it, (to see some of their contribution please refer to this post.) Each student collected oral histories of hurricane María and its aftermath in Puerto Rico. The students that were trained about the ethical collection, transcriptions and translations of oral histories, collaborated with Professor Chansky and with an organization known as the Voice of Witness– an organization that utilizes oral histories as a means of enacting social justice; their motto “Amplifying Unheard voices”, which is what was being done with the María project. One of the project’s main focus was to argue that the releaf Puerto Rico received after the hurricane was inadequate, which caused the death of a lot of people in the island. But, before all this developed into something more Dr. Chansky was first inspired by her own students narratives and stories.

Dr. Chansky recalled, that after classes had resumed a month after María, she felt it was necessary for students to share their experiences in a safe place and communicate what they had gone through during those first weeks and months following the hurricane. Those narratives that the students had shared inspired her to take action, feeling that “it wasn’t fair” that what these students wrote would only resonate in her mind; she felt that it had to be shared. The weeks that followed, she started to think about:

Afterwards, upon receiving an email from the organization Voice of Witness calling out for ideas for a book, she felt that based upon what she had seen from her students “the people of Puerto Rico needed to be listen to; which was the proposal she turned-in, and how the project developed into something bigger. After a very complicated process of many proposals and revisions, the project was elected (after officially gaining a spot in the Story Lab.)

During the months that followed she made it a priority to record the selflessness of those that continued to help others after the hurricane, in spite of their own need, and subsequently those that had an important story to tell about their own journey in this new Post-María world. After a conversation that concerned the hardship we had seen first hand during the aftermath period, and how we remembered seeing people helpless, in their broken homes for months,(as if they weren’t noticed by anyone), she said:

“We were made invisible, and I don’t want my students to remain invisible.”

The project also hopes that others may be able to find out more about Puerto Rico and the situation Puerto Ricans were in during and after the hurricane. The Voice of Witness project will end in a book published by Haymarket Books and will also be featured in The Humanities Action Lab project’s Initiative on Migration, Climate Justice, and Environmental Justice international exhibition and in their documentary.

At the end of the interview, Dr. Chanksy expressed how happy she was having aquired the necessary tools to help those who had suffered and weren’t heard– to now be seen. How proud she was of her students, and how grateful she was for the opportunity she received.

Congratulations on your achievements Dr. Chansky!