Jenaira Martínez, the English graduate who built a better Princess 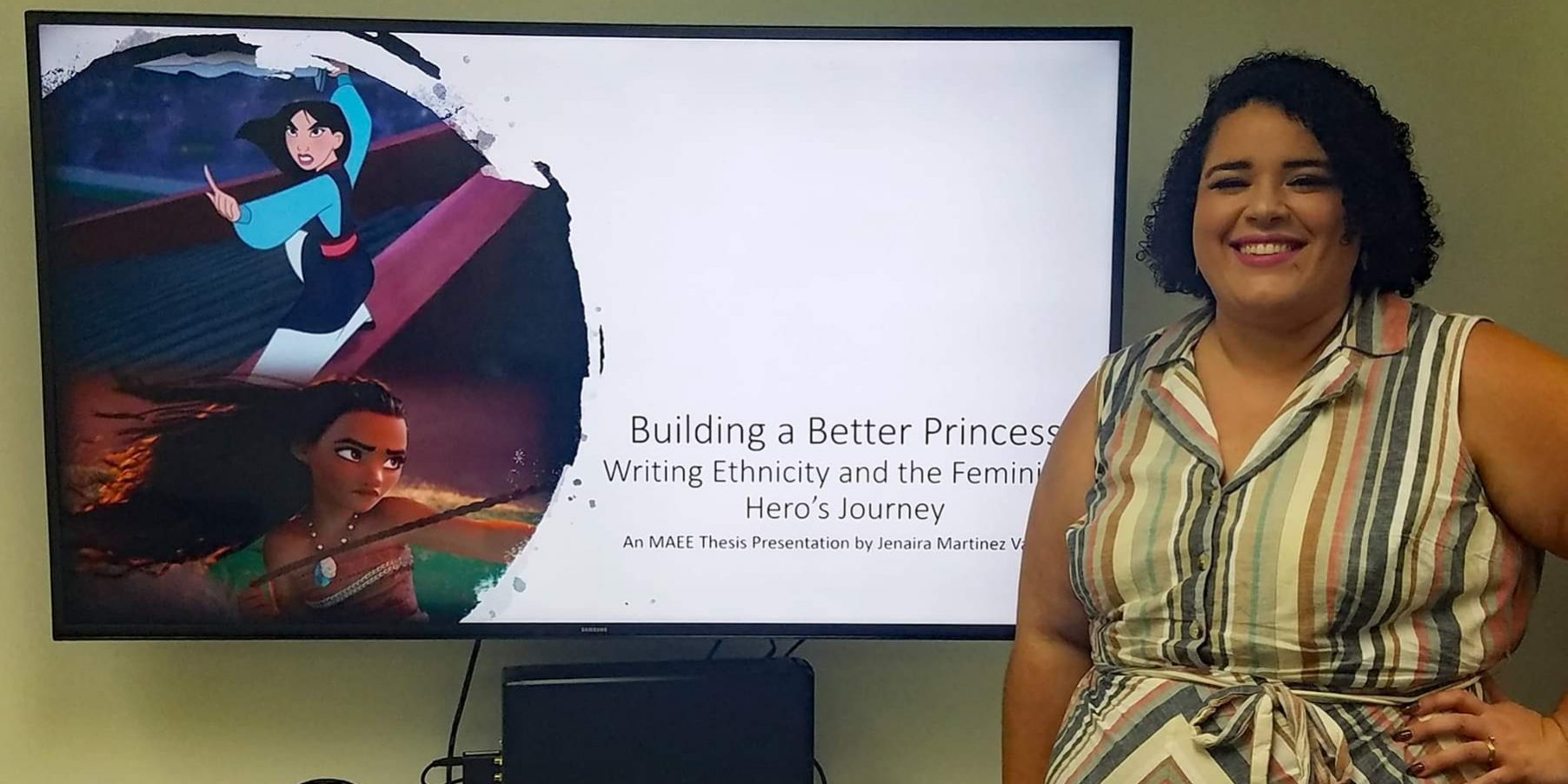 On December 2nd of 2019, English graduate Jenaira Martínez, stepped into the study hubs of the GRIC to defend her Feminist thesis titled: “Building a Better Princess: Writing Ethnicity and The Feminist’s Hero’s Journey.” She describes her work as a hybrid thesis which consists of a theoretical approach involving gender theory/analysis and a creative portion of a novel she has been writing since high school.

Martínez shared insights on the inspiring process of developing her thesis, including some advice for the student community, especially soon-to-be grad students who are near to their thesis defenses. (Stick around if you are looking for some enlightenment and inspiration in the matter.)

Martínez Vargas’ thesis was inspired by her reflection on the female characters portrayed in films—particularly the ones from Walt Disney Studios—which she believed could be represented with more realistic traits. She conducted an analysis on Disney princesses, from Snow White to Moana, providing a description of each one in order to explain how they were positively or negatively represented.

The English graduate developed an in-depth analysis of two of the most powerful feminist representations of women Disney has worked on: Mulan and Moana, explaining how the cinematographic studio has become more inclusive by creating characters that embrace multiple ethnicities. In addition, she shared how this experience has helped her in the creative process of writing her novel, The Oracle of Laurencia, which incorporates an empowering Princess with the name of Alina as its main character. Martínez visualizes Alina as “a mixture of all the positive characteristics that are used in Disney Princess films combined with improved and realistic character traits.” Her intention is to provide a better female role model for young viewers.

Martínez states that the biggest challenge she had to face while writing her thesis relied on the administrative portion of it, such as changing her committee members at the last minute, rescheduling some paperwork days because of inconveniences and running through Chardón in search of signatures.

When asked about what she would have done differently, she mentioned she would have probably organized herself since the beginning to avoid a few hardships during her studies. Martínez added: “Once I was able to organize myself, I was able to get through the writing process a lot quicker and it was a lot easier.”

For this reason, her first wise advice to fellow undergraduates and new grad students is to work on their organizational strategies. She explains that you should “make good use of your free time and write a little bit every day.” Secondly, she mentions the importance of accurately arranging the administrative matters, such as choosing the committee, in a mindful manner so that their process runs smoothly.

Highlights of her academic journey:

Martínez mentions that the relationships she acquired during her days as a graduate student are the highlights of her academic experiences. She appreciates the friendships and college connections she established with students and professors referring to their interactions as “a refreshing change of pace.” Additionally, one of her good experiences—she remembers to this day— is the supportive attitude of professors who conveyed a type of therapy sessions for their students during stressful times.

The former English and Arts major is currently working with her novel, The Oracle of Laurencia, which she started writing during her High School years. She aspires to publish it in the future, when the opportunity to do so arrives. Martínez is also considering the possibility of applying to a Creative Writing PhD program. It becomes pretty clear she will have a bright future as a Feminist writer and artist. The English Department Blog admires her academic development and wishes her the best of luck in her professional journey.