What Drives Your English: Itza M. Hernández Seeks the Answer 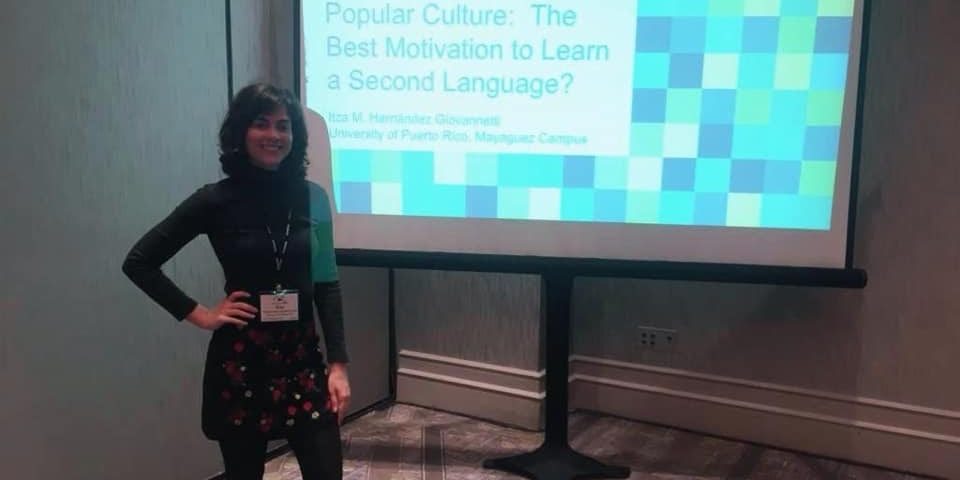 Always looking for ways to improve her teaching skills, Itza M. Hernández is an English Graduate from the University of Puerto Rico’s Mayaguez Campus (UPRM). She has participated in multiple conferences across the sphere including Belgium, Washington, DC, and Aruba. On the 4th of May of 2020, she defended her work with unwavering resolve; her thesis titled “Exploring Influencing Factors in English Language Acquisition in Puerto Rican English Majors.”

By delving into anecdotal data from the life histories of several gracious volunteers, Hernández aimed to determine ways in which Puerto Rican Undergraduate English Majors who were raised in bilingual Puerto Rican homes acquired proficiency in English as a secondary language.

The research and writing process

At first, Hernández sought to unravel the role of media, such as music and movies, in each volunteer’s story. Past experiences had made her believe that both of these mediums were highly influencing factors in the acquisition of English. She explained that in the past, she would sometimes ask friends or acquaintances on their methods for learning and being successful in the English language. The response would usually include movies and music as the frequent elements utilized for  learning the language. This resonated with her, since in her youth she was a fan of many television shows in English, which also helped her develop as a speaker of the language.

However, as more data came into play and the complexity of her work grew, Hernández realized she would need to reevaluate her direction moving forward. After interviewing her participants, it was revealed that other elements played a prominent role in language acquisition. “Participants reported parental involvement to be one of the main factors that influenced them to learn English… their parents were always a source of encouragement,” she concluded.

This find created a challenge in her study. Now, Hernández had to shift her focus to include aspects she previously had not considered. Though surprised, she welcomed this change as it proved that there was more to be peeled back on this subject. Her interest grew tenfold and her work bloomed greater for it.

When asked what the most challenging part of this process was, she pointed out:

“I think finding participants for a study is the hardest part for any researcher, so I am eternally grateful to those who volunteered to be interviewed. I really appreciate how they took time out of their busy schedules to sit with me and narrate the story of how they learned English. It was their words that made my ideas come to life and kept me motivated to work on this project.”

After a successful defense of her thesis, she advises graduates to: “Be persistent! At times it can be very overwhelming, but it is all worth it in the end.” Hernández is currently focused on her long-term goal of being a full-time Professor and is in the process of applying to multiple PhD programs.