Nuclear and mitochondrial phylogenomics of the Diplostomoidea and Diplostomida (Digenea, Platyhelminthes)

I worked on this project with Dr. Sean Locke of the UPRM Biology Department. We developed a modified DNA extraction protocol to extract DNA from miniscule tissue samples from Diplostomoidea flatworm parasites. Using a grant from the Pittsburgh SuperComputing Center we were able to reconstruct seven new de novo draft genomes for which there was no genomic data previously. Using this data set along with existing parasite draft genomes we were able to reconstruct a phylogenomic tree of more than 500 nuclear genes and whole mtDNA genomes for this group of parasitic flatworms. This work has now been published in the International Journal for Parasitology. 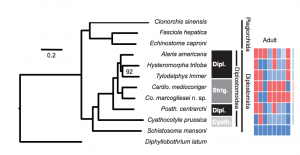 For plant-eating insects, we still have only a nascent understanding of the genetic basis of host-use promiscuity. Here, to improve that situation, we investigated host-induced gene expression plasticity in the invasive lobate lac scale insect, Paratachardina pseudolobata (Hemiptera: Keriidae). We were particularly interested in the differential expression of detoxification and effector genes, which are thought to be critical for overcoming a plant’s chemical defenses. We collected RNA samples from P. pseudolobata on three different host plant species, assembled transcriptomes de novo, and identified transcripts with significant host-induced gene expression changes. Gene expression plasticity was pervasive, but the expression of most detoxification and effector genes was insensitive to the host environment. Nevertheless, some types of detoxification genes were more differentially expressed than expected by chance. Moreover, we found evidence of a trade-off between expression of genes involved in primary and secondary metabolism; hosts that induced lower expression of genes for detoxification induced higher expression of genes for growth. Our findings are largely consonant with those of several recently published studies of other plant-eating insect species. Thus, across plant-eating insect species, there may be a common set of gene expression changes that enable host-use promiscuity. This work has been published in PLoS ONE. 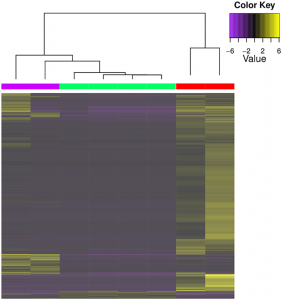