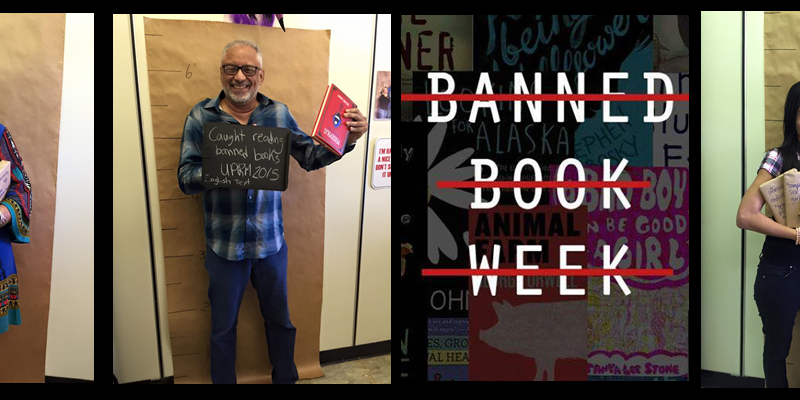 The annual celebration of Banned Books Week took place from September 27nd to October 3rd this year, with the English Department Student Association (EDSA) taking charge of its coordination. The week was established by the American Library Association (ALA) in an effort to unite “the entire book community –- librarians, booksellers, publishers, journalists, teachers, and readers of all types –- in  shared support of the freedom to seek and to express ideas, even those some consider unorthodox or unpopular.” For more information on the history of the event, you can visit their website here.

EDSA divided their efforts into two days, with activities, conferences and presentations taking place at the Universal Hour in the English Department’s Language Lab. On the first day, students were given a presentation titled “What are Banned Books?” by MAEE candidate Laura García de la Noceda. Those present were given more information on what banned books are, what it means to ban a book versus challenging it, and why books are banned today.

Banning a book from the shelves of local libraries or from whole countries is the result of a person or group of people who oppose it strongly enough. Books such as J.K. Rowling’s Harry Potter series or Marjane Satrapi’s Persepolis have been challenged due to their so-called inappropriate content. This can range from anti-Christian portrayals or examples of witchcraft to alcohol and drug abuse, offensive language, or homosexual themes.

A photo booth was set up where felons of the highest order– students and professors– were photographed with the banned books they were accused of reading.  Professors and students alike were invited to participate in all activities, including a guessing game with the banned books. These were wrapped in brown paper and titled with the reasons for their banishment. Students had to guess at the books and try to figure out which ones fit the list.

On Thursday, Dr. Nancy Vicente and MAEE candidate Gabriel Acevedo joined forces to present a workshop titled, “Exploring ‘The Other Within’ Through Children’s Banned Books”. The presentation was centered on making others aware of topics that sparked unnecessary controversy among people. The duo aimed to “promote tolerance and understanding to gender issues in society.”

With readings of children’s books like And Tango Makes Three, a story about two male penguins adopting a chick, Gabriel Acevedo explained the opposition of children’s books on adoption and same-sex couples on the premise of “not promoting family values.” He challenged students to formulate arguments where they could convince school authorities or their parents to remove these books from banishment, and to write an essay where they reflected on how issues were dealt with in their schools. The workshop caused a great deal of discussion on the dangers of censorship and banishment, which oftentimes closes minds and causes more harm than good.  The event was a complete success, and will most likely return next year. 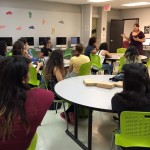 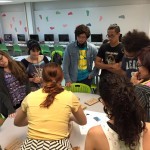 Students trying to guess which books were hidden in which sleeves. 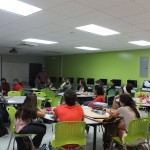 MAEE Candidate Gabriel Acevedo presenting ‘The Other Within’ Through Children’s Banned Books”.