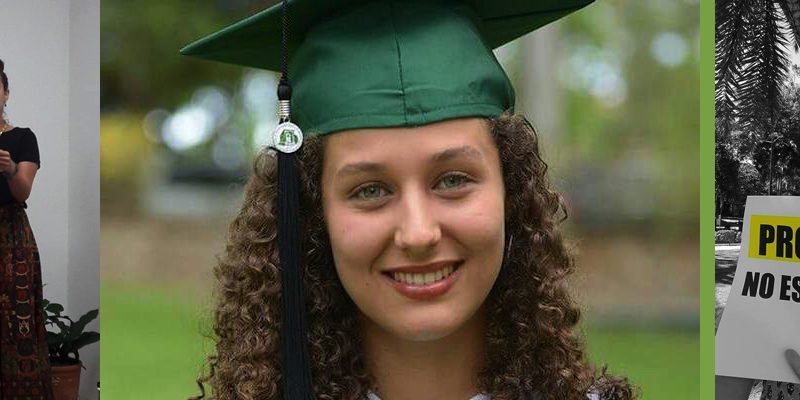 Meet Ana Portnoy Brimmer, a graduate of our Department who earned a bachelor’s degree in literature and received the Luis Stefani Raffucci Award, the College of Arts and Sciences Award, and the John S. and Sarah E. Mellowes Award in 2016.  Ana is a poet and performer, creative nonfiction writer, artivist, and a Master’s student of Literature in the Department of English at the UPR: Río Piedras Campus. Her area of specialization is creative writing, particularly political poetry in the form of spoken word, and she will be producing a manuscript of original work as her Master’s thesis.

She is currently the Assistant Editor of Tonguas Magazine, the literary magazine of the Department of English of UPRRP, and a freelance writer for Migo IQ. She has presented her poetry both locally and internationally, performing in Puerto Rico, Mexico, New York, both in conferences and featured poetry readings, including El Primer Encuentro Internacional sobre Pensamiento Crítico en el Caribe Insular and Barrio Poetix-at La Marqueta. She is currently an Under the Volcano Fellow taking part in the Under the Volcano, Writing Masters Classes and Residency in Tepoztlán, Mexico, and Beyond. Her work has been published in Sábanas Magazine and in a Tonguas Magazine special collection, and is being considered for publication in a number of literary magazines. Her poetry is political, interweaving hybrid identities, decolonization, and liberation struggles; Puerto Rico and Mexico; social justice, awareness and consciousness; and intersectional feminist empowerment, to name a few. Born in New York, Ana is the daughter of Mexican immigrants, but was raised and currently lives in Puerto Rico, all of which gave birth to her poetic alias: La MexiRican.

Presently, Ana is very active in the UPRRP and its surrounding poetry scene, constantly organizing and hosting open mics, poetry slams and readings. She employs poetry as a tool for activism, advocating against the depoliticization of poetry and art, and believing in poetry as an herramienta for building community solidarity; She is now collaborating with the Voces ShowCase Series Poetry Slams –  an initiative to re-establish the spoken word tradition in Puerto Rico – which will be hosting a poetry slam in Mayagüez on Friday, February 24.

She remembers her journey as an English major at El Colegio as a socio-political awakening, as a love-affair with poetry, as a beautiful encounter with literature and writing and their potential as agents of change. She is forever grateful to her professors, who are responsible for her coming-into-being, and to her colleagues, who were, and continue to be, an inspiration for ongoing critical and creative collaborative projects.