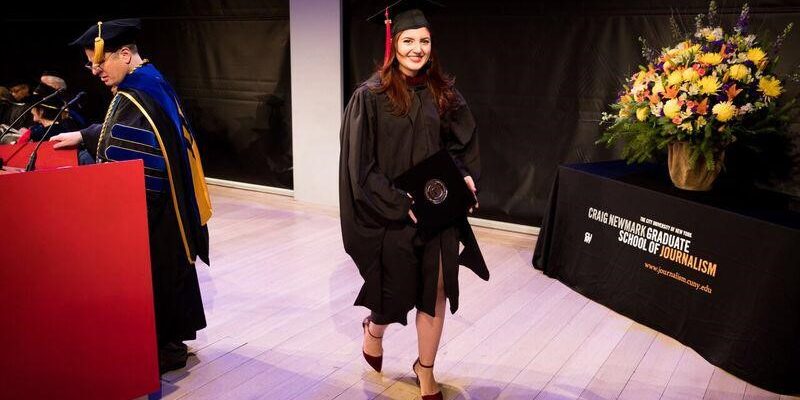 Ms. Claudia Irizarry Aponte (from our 2017 graduating class) was recently chosen to receive the Social Justice Reporting Award; funded by the Sydney Hillman Foundation. This is one of four Alumni Awards that the School of Journalism gives to students, based on their excellent work and academic performance.

After graduating as a literature major in 2017, she pursued her graduate studies at CUNY (City University of New York) with a dual concentration in Spanish-language and urban reporting. Then 6 weeks after she arrived at CUNY, Hurricane Maria struck the island and gave her a mission.

“I was homesick and adjusting to a new life and then all this happened.”

This was an opportunity she didn’t want to miss out on. Throughout her studies, she wrote about the island and the US. She explained how several of her colleagues worried that she would be typecast as a reporter that only writes about Puerto Rico, but her professors encouraged her to keep going.

“I was very frustrated with the lack of coverage of the situation in Puerto Rico from US-based media. So that kind of gave me the itch to follow the story while at school”

When she was told she had been nominated for the award, she was very surprised, mentioning how the nomination process is secret. “When I found out I was selected, I was so honored,” she said. She also stated how she owes her thanks to the UPRM’s English Department. “The rigorousness of the English Program gave me the momentum to handle the craziness of grad school” and gives her thanks to Professors Leonardo Flores and Jocelyn Géliga. “They were invaluable in my development as a journalist. Leo pushed me to do more multimedia stuff and Jocelyn was my first journalism professor. My life changed when I walked into her classroom.”

Her awards and hard work have led to great opportunities. Claudia interned at Latino USA and The Philadelphia Inquirer. She is currently working at “The City,” a new non-profit digital news startup that provides in-depth coverage of New York.

All of us here at the English Department would like to congratulate Ms. Irizarry Aponte on her achievements and wish her the best of luck in all her future endeavors.