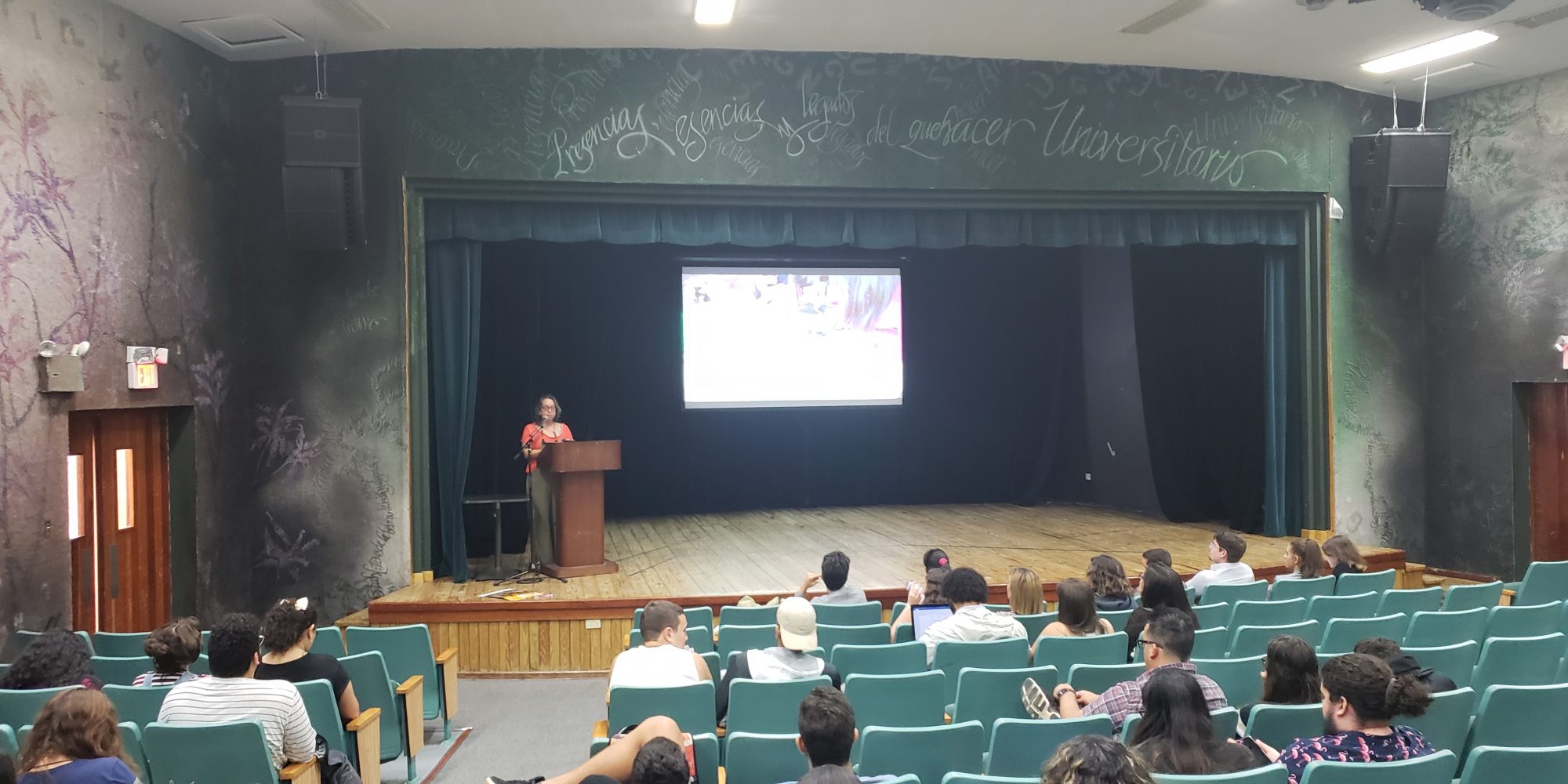 On February 28th, Dr. Ricia Chansky’s Narrative as Social Justice class hosted students from the Interamerican University Fajardo (IUF) in the Figueroa Chapel auditorium to foster collaboration and ideas in Mi María, a project that gathers, curates, and amplifies the stories and images of people who endured the impact and aftermath of Hurricane María in Puerto Rico.

After the UPRM opened its doors following the storm in October 30th, Professor Chansky restarted her Creative Writing course with a class exercise where students wrote short memoirs about their experiences in the aftermath of the hurricane. This was an attempt to move forward as they overcame the difficulties of lacking basic services like electricity, water and internet. “I was very naïve,” shared Chansky in her opening statements at the event, “I thought that we would share our story and punto!” However, she told us that she cried for hours in her dining room table as she read by candlelight over 100 memoirs written by students in pencil and notebook paper. She quoted one of her students’ memoir that impacted her the most onstage:

The saddest thing in the world was to see our neighbors digging graves in their back yards because relatives had passed away due to the lack of medical attention in Aguadilla, since the only hospital had to be shut down.

“These were the types of narratives that my students were turning in to me,” Dr. Chansky explained ”…and I felt as though it was wrong that people weren’t hearing these narratives. I felt that [through] the news coverage and the report about Hurricane María human beings were being erased. They were being silenced and their stories were not being heard.…” From these raw and unedited memoirs the Narrative as Social Justice class and the Mi María project were born.

Mi María is an autobiography studies and oral history project– within the fields of critical disaster studies and environmental humanities– that gathers and curates people’s words and images of the social and environmental impact that Hurricane María had on Puerto Rico. The main purpose of this project is to amplify the voices of those affected by Hurricane María for the national and international community to recognize and understand. This project emerged from Dr. Ricia Chanky’s Narrative as Social Justice class, where students learn narrative production as a means of furthering social justice through direct participation in producing, editing, and curating narratives from the hurricane.

The student collaborators oversee various research and editing tasks, such as interviewing hurricane Maria survivors, experts and professionals that worked during the storm, and collecting broadcast from radio, photography and music. “This semester we are focusing on curating some of the materials gathered by students last semester and developing other genres of multimodal auto/biographical narratives” shared Andrea Valdés, an English Literature major and collaborator in the project. The collaborators are divided into different work groups, such as Narrative Editing, Micro-Narrative Collection, and Verbal Design.

Other than to amplify the voices and stories silenced by mass media and government in the hit and aftermath of Hurricane María, the purpose of the Mi Maria project is to radically change the way public and private entities respond to natural catastrophes by exposing the struggles, needs and lost endured by the Puerto Rican people endured. Valdés further explained on a written interview that the material being produced is to be contributed to a larger exhibition curated by the Humanities Action Lab “Initiative on Climate and Environmental Justice,” a project collaboratively led by Columbia University, Rutgers University, and The New School.

The development of the Mi María project is not limited to Colegio students taking the Narrative as Social Justice course but relies on the indispensable collaboration of students from the Interamerican University in Fajardo. This team of student collaborators are working in the design, illustrations, and general marketing of the project under the mentorship of Dr. Maria de Mater O’Neill, the director of Rubberband Design Studio of San Juan. From creating posters and flyers to web design, Inter Fajardo collaborators have the task to transform the narrative and multimodal content collected, curated and produced by the Colegio team into the visual arts aspect of the Mi María project.

The first exhibition of Mi Maria by Dr. Chansky and her Social Justice class students, in collaboration with the design team of Interamerican University of Fajardo will be this May.